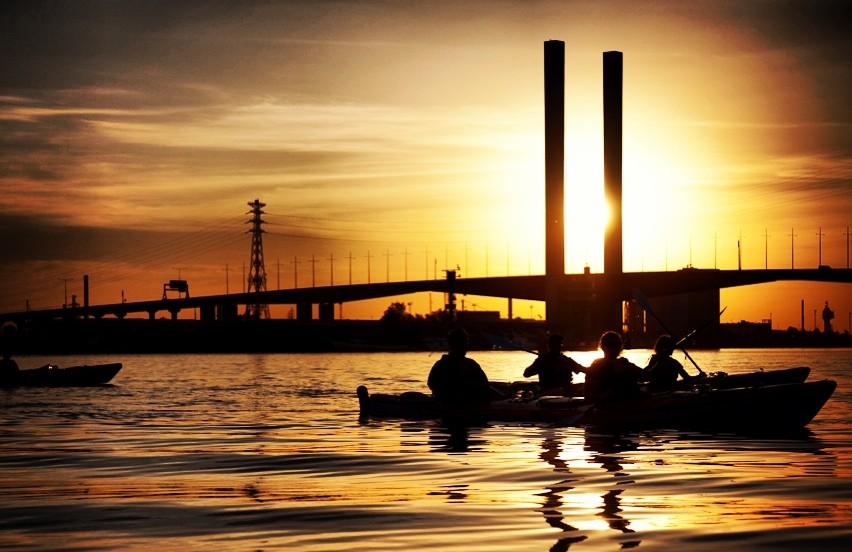 “You must be Mackenzie!”

The man who shouted my name was still too far down the docks for me to see him clearly. The first thing I saw was his big, easy smile, white against his brown skin. He was tall and athletic, a regular Adonis, and introduced himself as Kent. His partner, Dane, introduced himself next. If Kent was Batman, Dane was Robin. Smaller and scruffier, with a beard and chipper attitude, he gave an impression of the capable sidekick.

These two were to be our guides as our group kayaked through Melbourne at sunset.

The dynamic duo helped the six of us into our tandem kayaks, and we paddled around the harbour to get a feel for the teamwork involved with coordinating and steering a two-person sea vessel. We were an intimate group consisting of a Vietnamese family with two kids, a fellow travel writer, and myself.

Kent and Dane guided us up to the docks outside a restaurant, where we moored our vessels but remained in them as we were served fish and chips dockside. We floated in contented silence as we noshed and watched the sun get lower, the sky a flushed pink. The aquatic smells from the harbour algae and lapping waves against my boat made my meal taste even more authentic.

We finished just as the sky was turning a burning orange, and started to paddle out towards the sea and the lighted bridge in front of us. We were all very quiet to not disturb the silence of the water. The Melbourne Star Observation Wheel was lit up and turning slowly in the distance. The sounds of people faded as we glided farther out.

Soon we took a hard left into the mouth of the Yarra River, leading us straight into the heart of Melbourne. The sun had set and left the water inky, reflecting the city lights that were emerging on the banks of either side of us.

The further into the city we paddled, the livelier the banks became, showing us vignettes of parties and gatherings, everyone in fancy Derby attire from earlier that day. Some people noticed us gliding silently past them in the darkness and waved or yelled drunkenly in our direction.

All of it came to us in echoes of a distant dreamscape. We weren’t a part of that world, we were just observers, weightless and silent.

Kent and Dane told us to stop paddling and hold our spot in the middle of the river — they had a surprise for us. We all faced the shore, looking at massive stone columns lining the bank. Suddenly, one of the columns shot fire into the air. Then another column, and another. Soon they were spouting fire in a choreographed dance, halting any onlookers and earning various oohs and ahhs.

When our finale was finished, Dane had a pyromaniac’s gleam in his eye, and Kent calmly guided us further downstream to the shoreline. Everything was different on land: hard, loud, bright.

I hugged Batman and Robin goodbye and thanked them for sharing their subdued world with me.