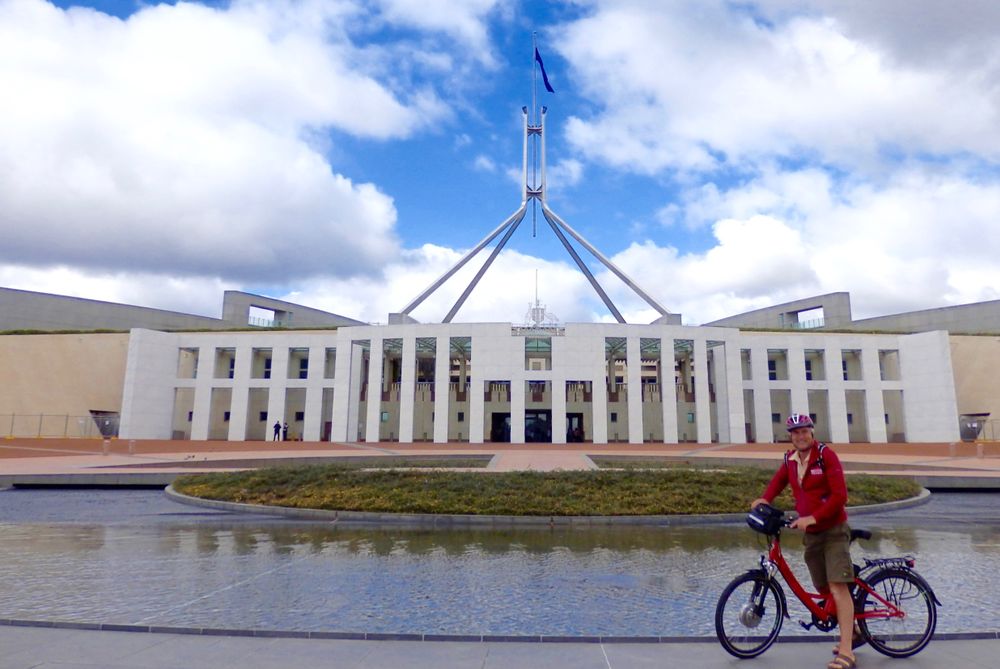 The complete guide to: Canberra travel

Just ranked by Lonely Planet as the #3 city in the world to visit in 2018 and packing a big punch for a small, easygoing city, Canberra is where nature and outdoor adventure can be found alongside cultural must-sees and burgeoning local food and coffee precincts. Here are our tips to help you plan your perfect trip to the city.

Getting to and from Canberra

If you’re arriving into Canberra airport, the new Transport Canberra bus service Route 11 is a good option to and from the city centre (about 5 AUD each way and runs at least every 30 minutes. Otherwise it is not far by metred taxi to the city centre, where most hotels are clustered on the north side of the lake (a taxi will cost you about 25 AUD and take 10 to 15 minutes).

If you’re coming from Sydney, the best value option is the frequent Murrays bus from Sydney Central Railway Station. It is three hours’ travel through bushland, farmlands and around Lake George straight to the heart of Canberra city (the Jollimont Centre bus station), which is within walking distance to a range of nearby hotels and apartments, and the youth hostel.

The Greyhound bus or V-line train and bus combination from Melbourne obviously takes a lot longer (about nine hours), but is a great way to see the countryside.

With an extensive network of footpaths and cycle-ways, walking and cycling are the best options for getting around the heart of Canberra. No parking or taxi fees! (Nearly everywhere in the city is paid parking.) Get your free map of the Lake Burley Griffin cycle loops from the Visitor Centre at Regatta Point (also supplied free on our tours).

Of course the best way to cycle the city or go on an effortless circuit of the parklands around the lake is to hop on your bike. Hire a straight pedal bike from Rohan at Cycle Canberra (0449 557 838) and he will deliver a bike to where you are staying. Some hotels also have Spinway bike hire using a credit card.

The extensive Transport Canberra bus system is also a good way to get around. You’ll need to buy a MyWay travel card from a local newsagent or agent. About 30 AUD will be enough to get you around most places for two days. And the buses are also equipped with racks at the front to carry bikes.

If you want to get out further to the spectacular nature parks of Tidbinbilla or the deep space tracking station (a 45-minute drive south), or to wineries (a 30- to 50-minute drive north), then hiring a car is really your only option.

Things to do in Canberra

Canberra is pretty unique in options for experiencing the city, from the country’s national political and cultural institutions, to cosmopolitan café strips, to the “bush capital” (and kangaroo spotting) — all within a few kilometres of each other around a central lake.

As the nation’s capital, Canberra boasts lots of big national attractions, like the impressive Australian Parliament House atop Capitol Hill. And down the hill, by the southern side of the lake in front of Parliament, are art galleries, the Questacon science museum and many other national institutions.

Around on the north side of the lake, perched on a lakeside peninsula, is the architecturally stunning National Museum of Australia — one of the best places to learn about ancient Aboriginal and Islander cultures.

To enjoy the cosmopolitan café experience, there are three precincts with a good variety of scrumptious eating places and great coffee. We recommend the Kingston Foreshore (eastern end of the lake), the New Acton precinct (west of the city centre) and the hip Lonsdale Street in Braddon (just north of the city).

In the parliamentary triangle, there are also cafés at the National Library (great food and lake views from the outside terrace) and art galleries.

For wild side adventurers

For the bush capital experience, the best place to start is a walk in the Australian National Botanic Gardens. The gardens are three kilometres west of the city under the flanks of Black Mountain. (#localsknow tip: Black Mountain has the tall, round “Telstra Tower” — a useful landmark for keeping your bearings from anywhere in Canberra.) To go deeper in the bush capital, the 25-kilometre circuit around the cycle paths of western Lake Burley Griffin, and an optional five-kilometre side trip up to the hilltop Village Centre of National Arboretum Canberra will take you past grazing kangaroos (or snoozing kangaroos if in the middle of the day), abundant birdlife and some epic mountain vistas.

The unique contrast of national capital and bushland character is best experienced on the lake in a kayak in the late afternoon light, when life seems to kick back and slow down a notch. In a short easy kayak cruise you can glide from water views of the grand national buildings at the city centre to a serene lake wilderness surrounded by forested peaks — with just a glimpse of the Parliament House flagpole above the trees to remind you that you’re in a city.

Get Aussie fever up close, but without the crowds of Melbourne. The footy, cricket and basketball games have most Canberrans gathering for their tribal rituals thoughout the year. For the two local footy codes/teams (the Raiders or the Brumbies), head to the stadium in Bruce, nine kilometres west of the city (there are plenty of bus services). Cricket is at Manuka Oval east of city, which also plays host to the occasional up-close-and-personal Aussie Rules footy game for visiting teams. The women’s basketball team (the Caps) play at the National Convention Centre near the city centre.

The difference in Canberra, unlike in bigger cities, is the venues are less crowded and you are closer to the action on the field or court. It is usually very easy to get tickets at the venue. So if you want to experience Aussie sporting fever up close without being overwhelmed by huge crowds or rip-off prices, Canberra is the place to give it a go.

What’s on in Canberra

An intimate place to experience local and Australian performances (music, comedy and theatre), and usually at a great price, is the Street Theatre, just a 10-minute walk west of the city and next to the university. It’s also surrounded by places to eat, which serve the many overseas students living on campus. The Canberra Theatre right next to the city centre is where the big touring shows from Sydney and Melbourne roll through.

To catch a movie and check out the unique Nishi building and local restaurants, it is worth the 20-minute stroll to the Palace Cinema and its bar in the New Acton precinct, just west of the city centre. Otherwise the Dendy cinema complex is conveniently located above street cafés in the Canberra Centre shopping mall.

For the most comprehensive week-by-week listing of local gigs and events happening in Canberra, check out the Out in Canberra website.

If you love smelling the flowers, the annual Floriade festival in October is the place to be. It has expanded to include live music and other attractions at an outdoor stage amidst flowers and food stalls.

In February, the cosmopolitan nature of Canberra comes alive at the National Multicultural Festival, with the pedestrian mall in the city centre crammed with cuisines, dance and music from every corner of the planet.

In March, the ever-growing Enlighten Festival lights up the city, with national buildings in the parliamentary triangle becoming backdrops for spectacular light shows and installations, and the lakeside parks a place to find great street food and performances. It also incorporates the annual hot air balloon festival, if you are willing to get up early for the dawn balloon lift-off down by the lake.

In March and April, thousands of Australians flock to Canberra for the Easter long weekend National Folk Festival. 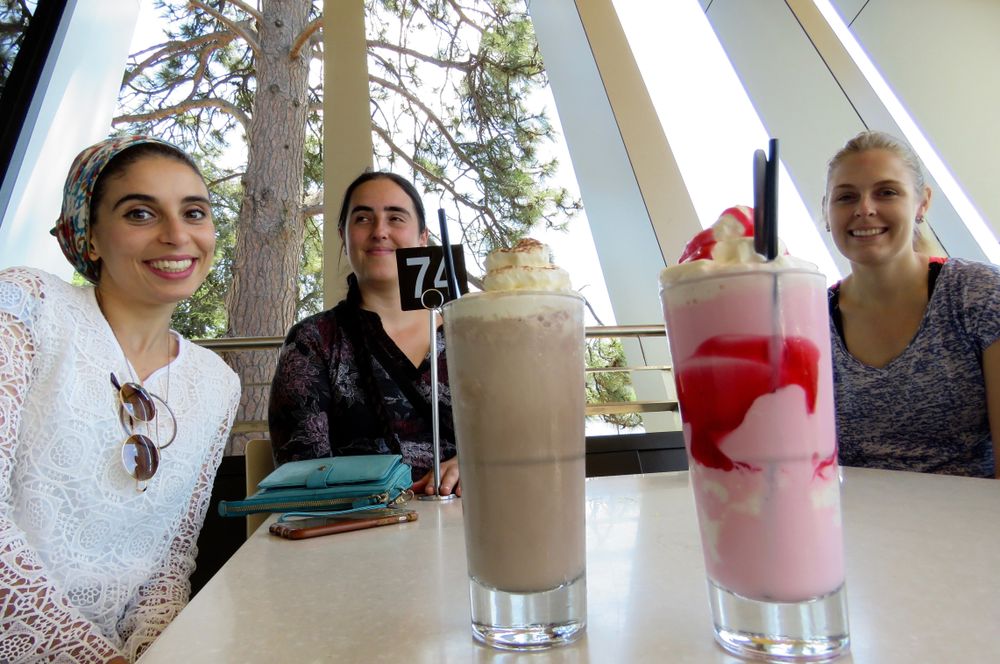 At the National Museum, where Australia’s stories come alive (and a top spot for lunch or a cool drink) | Photo by Canberra Urban Adventures

Canberra on the big screen

A uniquely Canberra place to start (and a place to visit when in Canberra) are the films and music at the National Film and Sound Archive. Yes, it sounds a bit dry — but just forget the word “archive.” The place is packed full of free and interesting exhibitions and screenings of all things Australian.

Listen to “Under the Milky Way” by The Church (local boy made good) and The Whitlams’ “I Make Hamburgers” for a music taster, so to speak. And check out “Ready for the Fight” by local sometimes-band Fun Machine — where the glitter never comes off.

Read “My Brilliant Career” by Miles Franklin (also a film by Gillian Armstrong). The author grew up in the Brindabella mountains west of Canberra 100 years ago but her themes of ambition and unsatisfied love are timeless, as is perhaps the message of her sequel, “My Career Goes Bung” for a modern politician or two.